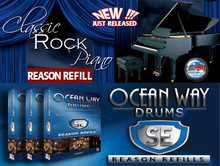 This classic Steinway grand piano was recorded at Emblem Studios in Calabasas, California, a recording studio space formerly known as American Recording, where many legendary artists have recorded: Carlos Santana, Billy Preston, Three Dog Night, Bonnie Raitt, Meat Loaf, Joe Cocker, Rob Thomas among many others. The piano was recorded through the studio s famous Trident A Range console using the same microphones and miking techniques that Ken Scott has used to record on famous classic rock records. A world class expressive piano instrument, the all new Classic Rock Piano is ready to be the centerpiece of your next piano-based masterpiece. You can also purchase this product for the Yamaha Motif XS and XF at Motifator.com. Coming soon for other formats!

The Classic Rock Piano ReFill is available to purchase for the introductory price of $69 USD (MSRP $99 USD).

Ocean Way Drums SE is a collection of three libraries for both Reason and Infinite Player for Kontakt.