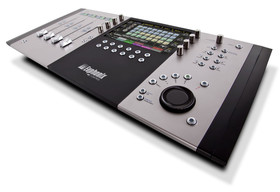 Euphonix has announced the MC Control v2, the latest addition to its award-winning line of Artist Series media controllers.

MC Control v2 features the same ergonomic layout and slim line design as the award-winning MC Control, but offers enhanced graphics thanks to a new LED-backlit touch-screen and even better tactile control of parameters via eight new custom rotary encoders.

MC Control v2 is the new flagship of the Artist Series and provides a host of controls to speed up and enhance the workflow process with almost any audio or video application.

MC Control v2 is expected to be available at authorized Euphonix retailers in late April 2010 at an estimated street price of $1499.99 USD.