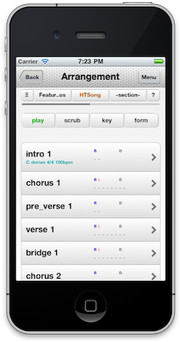 HyperTunes lets composers/songwriters express music directly in terms of musical structure, such as verse-chorus-bridge song forms. It also lets them collect and organize any number of musical patterns, song fragments, and songs within the app, all ready to “plug and play” in a new song with just a few touches.

Unlike other music studio software, in which songs are recorded and edited on a linear, multitrack timeline, HyperTunes represents song sections and instrument parts as discrete elements that can be readily navigated and reorganized even on a small screen, even one-handed. This structured approach helps users focus on the big picture as they compose – like trying out different variations of a song form – rather than getting bogged down in note-by-note tweaking on the timeline. Ready access to virtually all of one’s musical ideas and assets means new songs get off the ground quickly through the use of stock parts, and allows ideas not used in one project to be easily recycled in later projects, rather than getting lost and forgotten.

“I’ve owned lots of Digital Audio Workstations and hardware sequencers, and recently several mobile music studios too. They’re all fantastic for recording and mixing, but none of them let me try different song ideas as quickly and easily as I wanted,” explained Exploded Views Media founder James Mahoney. “I wanted to explore song variations with the same fluidity that I can explore melodies or chord progressions on a musical instrument.”

HyperTunes is designed to be as accessible to non-musicians and beginning composers as it is powerful for seasoned pros.

HyperTunes for iOS is available to purchase for $9.99 USD.