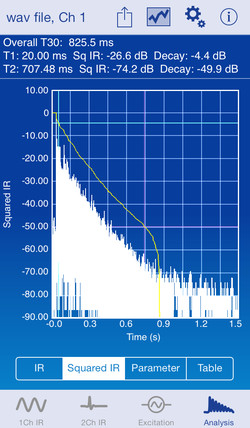 Faber Acoustical has released version 2.0 of its RoomScope room acoustics app for iOS, which now fully supports iOS 7 with a refreshed look and feel that is consistent with recent updates to SignalScope Pro and IOScope.

RoomScope turns your iPad, iPhone, or iPod touch into a room acoustics measurement and analysis tool. With RoomScope, you can measure a room impulse response and then calculate reverberation time, early decay time, clarity, and definition, as defined in the ISO 3382 standard.

RoomScope also allows you to adjust the Schroeder decay curve integration limits with the touch of your finger and plot the calculated room parameters versus whole or 1/3-octave band center frequency.

RoomScope for iOS is available to purchase for $99.99 USD.