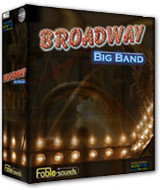 SONiVOX, on behalf of Fable Sounds, has announced the imminent release of the latest version of Broadway Big Band, a virtual instrument for Windows and Mac.

Fable Sounds’ Broadway Big Band™ Virtual Instrument upon its original release was widely hailed as the first and only virtual instrument to accurately portray contemporary jazz, blues, pop, and r’n’b woodwind, brass, and rhythm instrument’s playing techniques in a playable virtual instrument plugin, and since has been used in countless high-profile film, tv, album, multimedia, theater, and live concert applications.

By integrating the Broadway Performer™ technology directly into the Kontakt 4 Player via Kontakt’s powerful scripting engine, this new version of Broadway Big Band is designed to simplify use as well as add greater control over expressiveness. Now for the first time Broadway Big Band™ users will be able to use Broadway directly in their DAW environment without having to use any virtual midi cabling or more elaborate midi routing, allowing for a more stable and easy to use workflow. “Though the heart of Broadway remains much the same, with its over 140,000 samples, its new implementation, based on the recent technological developments, is entirely revamped and puts a much greater degree of power, flexibility, as well as accessibility in the users hands,” commented Yuval Shrem, co-founder of Fable Sounds™.

Broadway Big Band will be available to purchase from SONiVOX February, 2010, for an MSRP of $2495 USD.

Fable Sounds will be offering a special cross-grade price for registered users who wish to cross-grade to the new Kontakt 4 Player Edition of Broadway Big Band. This upgrade will be available directly through SONiVOX as well as SONiVOX’s international distribution partners.

BOSS introduces ME-25 Multi-Effects for Guitar