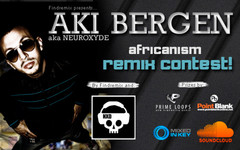 Findremix has announced the launch of the Aki Bergen – “Africanism” Remix Contest.

We have teamed up with Neurotraxx label to start a new exciting remix contest, offering up the parts of tribal house hit “Africanism“. As well as get remix released on an official EP on Neurotraxx, winners will get prizes from SoundCloud, PrimeLoops, Mixed In Key and Point Blank Music School!

We can find Bergen’s name in the first position of the Deep House Beatport chart for three times, and in the 1st position of Beatport General chart together with Doomwork with the smashing hit “Jazzy Stuff”. His sudden fame provided him big collaborations with artists such as 2000 and One, Dj Madskillz, Milton Jackson, Pezzner, and his remixes are between the most requested and loved.

Deadline for entering the contest of December 31, 2010.