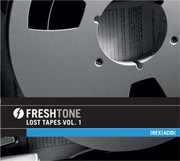 Freshtone Samples features the work of producer musicians Matthew Corbett and Mike Wilkie who are best known in the world of samples for their work with Zero-G, including ‘Sounds of the Seventies’, ‘Vocal Forge’ and ‘Vocal Foundry’ which were all released to critical acclaim. They are also successful Film, TV and Production music writers with their tracks having been featured on many hundreds of productions around the world.

Time+Space has been appointed as the official worldwide distributor of Freshtone’s sample libraries and are pleased to announce the first release – Lost Tapes Vol 1 – which is available now as a DVD or download.