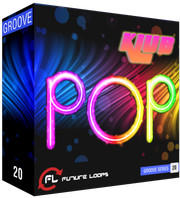 Klub Pop draws inspiration from the current crossover of styles that are smashing the charts and comes packed with the new generation elements found in pop, RnB and urban productions.

Tempos range from 110 BPM to 130 BPM keeping the mood dance-floor driven and inside each kit there’s a full mixed version but also individual loop elements and one shots used to build the tracks: Drums, Kicks, Claps, Bass, Synths, Hats, FX, Strings and more.

Inspired by artists and producers like Timbaland, Dark Child, Usher, Lady Gaga or Beyonce, Klub Pop features over 2 GB and is oriented towards the sound of clubs, dancefloors and radios.

Klub Pop is available to purchase for 19.95 EUR.