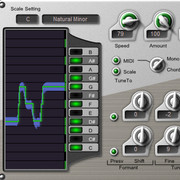 g200kg has released version 1.53 of KeroVee, a pitch correction effect plugin for Windows.

KeroVee is available to download as a freeware VST effect plugin for Windows.