GForce Software has announced the release of PC versions of impOSCar2, the successor of the software synthesizer emulation of the OSCar synthesizer.

Since the original impOSCar release we’ve carefully compiled user feedback and over the course of eighteen months, in another true labour of love, we’ve incorporated the best of these within impOSCar2 creating a synth that positively oozes more character, more playability, more expression and more detailed sound sculpting opportunities than could have been imagined a few years ago.

The impOSCar2 is now available for Windows and Mac (VST/AU/RTAS/Standalone), priced at £139.99 GBP incl. VAT. 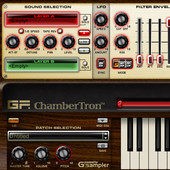 GForce has also released the ChamberTron, an expansion pack for the M-Tron Pro virtual instrument.

If you’re unfamiliar with Chamberlin® musical instruments, please take the time to read about them in the Original Instrument section and check out the video showing our Chamberlin instruments.

ChamberTron for M-Tron Pro is available to purchase for £69.99 GBP incl. VAT.