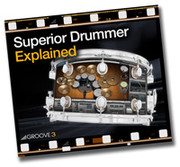 Scott starts the S2.0 journey from the beginning showing you the basics, such as installation, registration, interface overviews, using it in the most popular DAWs, building kits, using X-Drums to more advanced topics such as using the Groove Player, mixing and effects, advanced mapping, multiple outputs, bouncing and much more.

If you use Superior Drummer 2, it’s to your benefit to really know it inside and out, so you can work fast and get the best results. There are no other tutorial videos that go this in-depth into the amazing Toontrack Superior Drummer 2!