As every year: HGF Special May 6th News 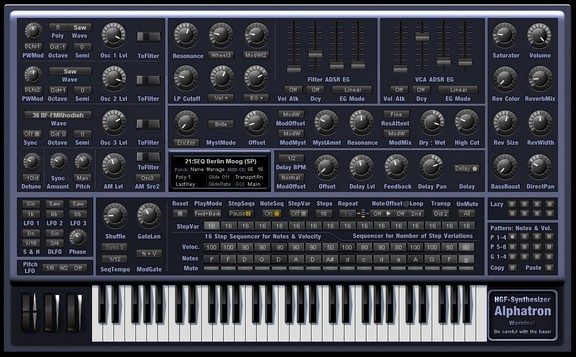 Alphatron is not just a simple VA synthesizer instead in using a 3rd oscillator with digital waves it does offer a lot more variation. Thus it can do analogstyle sounds reminding of the old Moog and Prophet days but also merge this with the digital realm in various ways to achieve sounds beyond.

Atonoise is great for creating some spooky, Sci-Fi type sounds.

Atonoise 2 is a widely enhanced version of prior Atonoise and is basically built around the modified Mystify processors of the Avatar ST VSTi Synth. Thus it can mangle up sounds to a great extend beyond recognition. It can be used on virtually any kind of sounds like vocals, drumloops, tracks and is even suited for deep sample processing if very few til no modulation is involved.

Both plug-ins are now available as freeware VST plug-ins for Windows.