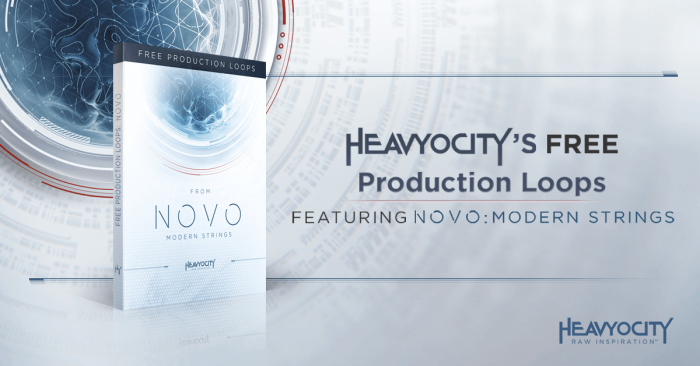 The library delivers a rare opportunity to test and sample content from one of Heavyocity’s dynamic cinematic libraries in the form of 380 MB of all-new WAV and Apple Loops files. This is a pack of completely new content, so NOVO owners and non-owners alike can take advantage of this year’s Free Production Loops.

Recorded at the famous Eastwood Scoring Stage at Warner Bros. Studios, NOVO is a world-class, deeply-sampled orchestral strings instrument…but that’s where its similarities to other orchestral VI’s end.

Beyond the almost 40GB of fully customizable sound-designed string samples, NOVO enables composers to tweak, process, layer, and sequence like no virtual instrument ever has before. Imagine the possibility of fusing superior orchestral strings with Heavyocity’s signature sound design; it’s a new frontier in hybrid film, game, and television scoring.

Simply put, there has never been a cinematic strings instrument quite like NOVO: Modern Strings, and in all likelihood, there probably never will be again.

Free Production Loops 2017 is available as a free download at Heavyocity.