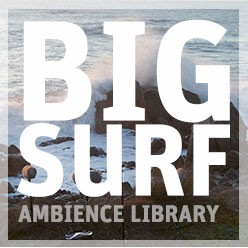 Hiss and a Roar has announced the release of Big Surf, a sound library featuring the sounds of stormy seas, big wave crashes and spray on to rocks.

Sitting a stones throw from three metre high waves that would take your life in the blink of an eye is an odd feeling, but I was very careful and returned from the West Coast with a hard drive full of seriously stormy seas, pounding waves and sea spray on to rocks!

After careful selection and editing I am happy to release a powerful new ambience library of BIG SURF! Delivered as 24bit 96kHz multi mic ambiences, with a minimum duration of three minutes each.

The sound library is available to purchase for the introductory price of $33 USD until August 3rd, 2013 (regular $49 USD).

HISS and a ROAR, sound fx