Homegrown Sounds has announced the release of the Kontakt Sequencer Collection, a collection of three 12 Pattern Sequencers with different approaches to sequencing.

Chord Stepper is a Midi Sequencer for Kontakt 5 which is focused on creating Chord Progressions triggered by a Midi Note. It has 12 Patterns which can be switched in real-time via the set of Triggers which are highlighted in Red on the Kontakt GUI Keyboard, which can be placed on any Octave. Each step can play a Chord Shape with a set of the most common Chords. Additionally you can also have a Sub Bass Root note, an optional Sub Bass + Note and a high Root note per step.

Probability can be enabled per step using the probability % to decide whether notes will play. This can be set so that either all notes or most interestingly the default will decide on a note by note basis which adds an incredible amount of movement to the pattern. Full repeat decides whether the length should be a single step on the last repeat or held on to the next note through repeated blank steps. You can also override the Velocity and Length to Full per step.

Procession Advanced adds Multi Patterns to Procession plus some additional Randomizers. The idea was to create a Sequencer which allowed using different tempo and step length Sequences which are run through a Pitch Re-Scaler to easily create and explore complex Sequences. 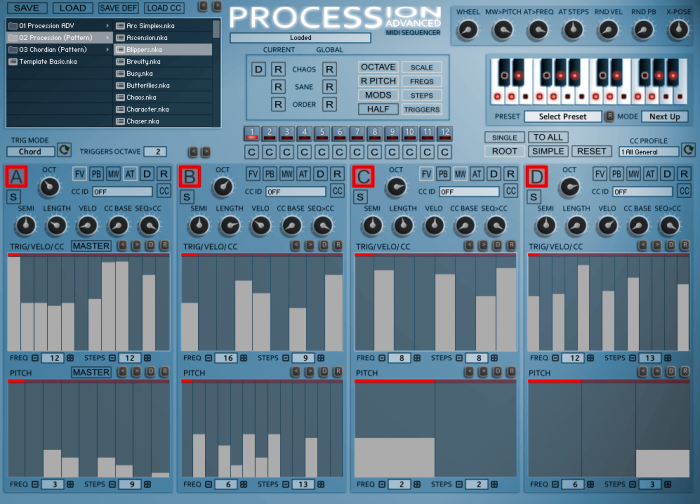 It also has a simple mode which locks all Sequencers to a single Frequency and Step Amount which is useful if you want to create chord style sequences. It uses 4 identical Sequencers, as well as independent Frequency and Step length for both the Trigger and Pitch Sequences, each sequencer also has Tuning, Length Percentage and Velocity controls which all support host automation.

Chordian Advanced is a variation on Procession with more of an emphasis on stacking pitches and lacks the CC implementation. The Advanced Version adds 12 unique Patterns which can be switched in real-time using the Trigger Octave Range. 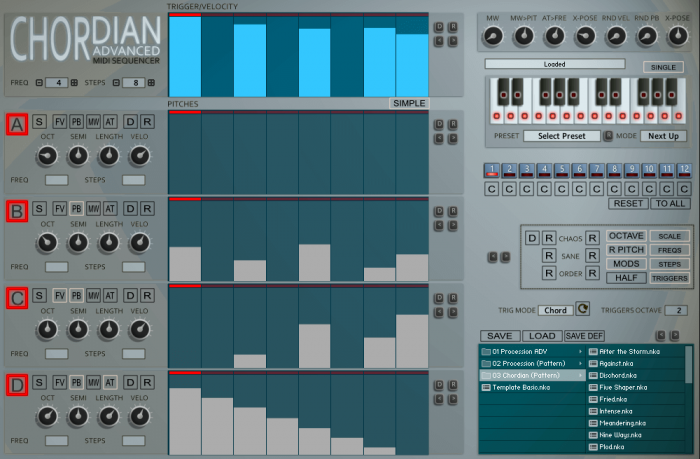 Chordian dispenses with 3 of Processions Trigger Sequencers but keeps the pitch Sequencers so that all 4 Sequences are played via a global trigger sequencer.

The idea is that in Simple Mode you can easily line up all sequencers to see what is playing across the steps and it is therefore much easier to build Stacked Note type sequences. Poly-rhythmic operation is still possible however when Simple mode is switched off, except that it is just the pitches that are Poly-rhythmic.

The collection also includes the previously released Procession and Chordian, which have an additional advantage that all Knobs can be automated by the host.

The Kontakt Sequencer Collection is available at an introductory price of $14.99 USD. All sales will add to the Augment Group Buy count.