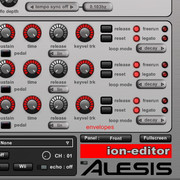 HyperSynth has updated its Ion-editor controller software for the Alesis ION and Micron synthesizers to version 2.2.

Ion-editor for Windows (VST) is available to purchase for $38 USD.