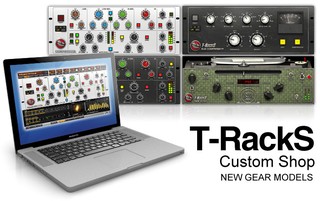 Two multi-processor channel strips, a compressor and a vintage tape delay add-on to the T-RackS range of EQs, dynamics and reverb processors, now comprising over 20 of the best sounding mixing-and-mastering native plug-ins available for the most demanding audio engineers and producers.

These new essential sound processors are available either as single plug-ins or integrated within the T-RackS plug-in and standalone software suite of effects. They can be easily tried out and purchased by any user of the T-RackS Free, Classic, Deluxe and Grand editions, using T-RackS’ exclusive Custom Shop feature. The Custom Shop is an online-based virtual store that’s integrated inside T-RackS, and offers users the possibility to build a customized mixing and mastering suite with their preferred virtual gear, trying and buying the modules a-la-carte via a convenient credit-based system.

The new T-RackS Processors are available for purchase now in the T-RackS Custom shop, using Custom Shop gear credits, with prices ranging from 60 to 120 credits each. Gear Credit Packs are available to purchase starting at $19.99 USD / 15.99 EUR (20 credits).