Ilya Efimov has released a new addition to its line of bass libraries for Native Instruments Kontakt. Rock Bass captures the sound of a hi-end Sadowsky NYC 5-string bass played with a pick (plectrum). 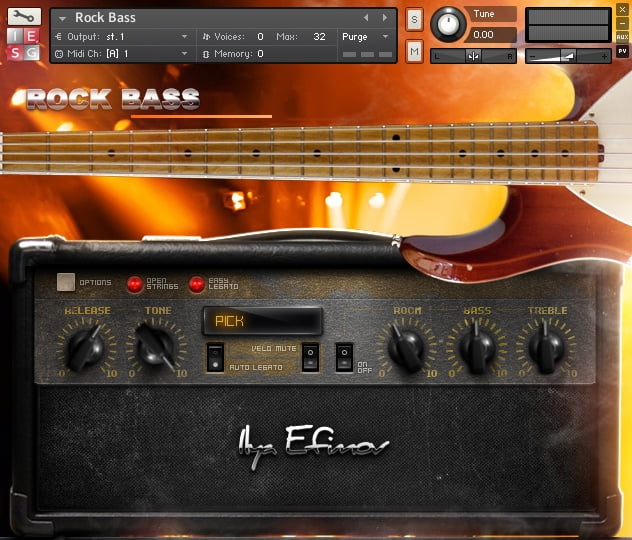 Not to mention that Sadowsky company itself is a respected bass guitars manufacturer, moreover the particular instrument used for sampling had strong low-end punch accompanying with great tightness. Due to such distinct and balanced tone many famous rock and pop musicians made they choice in favor Sadowsky instruments. We know that some our customers have been longing for such kind of sampled bass.

Like all our previous bass libraries this one is easy and intuitive to use due to a sophisticated algorithm, which automatically selects strings, changes left-hand position on the fretboard and turns on/off legato in real time. And as before three playing techniques are included in a single patch – pick, slap, palm-mute and additional articulations. Customary Open String mode, Chord Detection mode and X-note mode are also there, as well as Repetition keys and FX noises controls.

However Ilya Efimov Rock Bass introduces some new functions – like Downstroke mode, allowing playing steady bass parts so usual in hard rock music. Also there was added a retrospective round-robin algorithm, triggering each time a new sample avoiding “machine-gun effect” even if you keep pressing a key at the same velocity. Plus a special keyswitch now provides resetting of the round robin sequence to the initial position. So now you can Rock!!!

Rock Bass is available for Kontakt 5.6 or higher (full version), priced at 99 EUR.