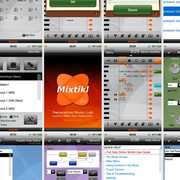 Intermorphic has released Mixtikl 3, a generative music application for the desktop and iOS.

Mixtikl is an app that lets you uniquely combine, tweak, perform & play up to 12 tracks of any combination of top quality generative music & audio or MIDI loops together with live FX.