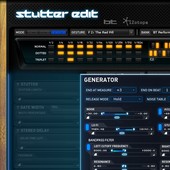 iZotope has released version 1.01 of Stutter Edit, a real-time playable effect designed by BT and developed by iZotope.

Tear up your tracks in real time, building thrilling fills, complex effects, shimmering sweeps, and staggering stutters that will leave your listeners screaming for more. They’ll think you spent hours slaving over the slices…but all it took was a press of a key. (Don’t worry, we won’t tell.)

Push your performances and production into a new realm of musical intensity with Stutter Edit.

Stutter Edit is available to purchase for $249 USD.