The BLUEBOX delivers up to 24 channels of mic/line inputs, a back-up solution that protects you from DAW freeze and failure, and a standalone multi-track audio recorder. 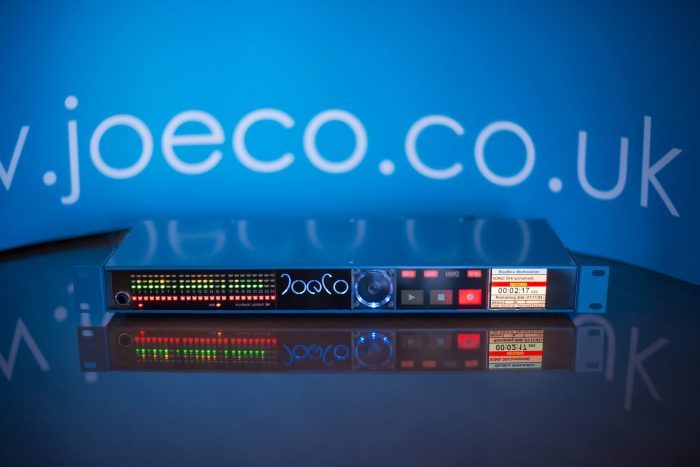 The BLUEBOX range launches with two Workstation Interface Recorders, the BBWR24MP and BBWR08MP. Both 24bit/96kHz models have been designed and constructed to the same exacting standards as the BlackBox range, with its reputation for rock solid reliability. As the names imply, the BBWR24MP provides 24 channels of individually switchable mic/line inputs, while the BBWR08MP represents JoeCo’s most affordable package yet with 8 channels of individually switchable mic/line inputs and 16 channels of dedicated balanced line inputs. All mic channels on both units incorporate JoeCo’s renowned mic preamp designs.

Adaptability is also central to the appeal of BLUEBOX. In a studio environment, a BBWR24MP will deliver 24 channels of pristine audio at 24bit/96kHz both to and from a workstation, with near-zero latency and simultaneously back up of all audio at the same quality. In the field, all of the mic preamps become available to deliver a fully stand-alone, multi-channel audio acquisition recorder with near-zero latency and 24bit/96kHz performance. For larger applications, multiple BBWR24MP units can be connected to Mac (via Core Audio drivers) or Windows (via dedicated ASIO drivers). You can also control your BLUEBOX as you choose, either from the workstation itself with JoeCoControl, or using the JoeCoRemote app for iPad. Both platforms open a wealth of features and functions such as the setting of individual mic pre channel parameters, expandable channel strips and real-time monitor mix adjustment.

“After the success of the BlackBox Recorder, we were asked to create an interface based on the same award winning technology. BLUEBOX is that and much more besides,” commented JoeCo Managing Director Joe Bull. “It’s a powerful high-end interface platform with the best preamps available, and it’s also the best insurance policy against losing work that any DAW-based studio can choose. No matter how robust a DAW-based set-up might seem, there is always a risk that something could go wrong and that critical work could be lost. With BLUEBOX, you can simply press record at the beginning of the day and it will capture all of your work, all of the time. Not even a power loss is enough to stop it.”

JoeCo will launch the BLUEBOX at IBC 2016, which takes place from September 9th to 13th at The RAI in Amsterdam, The Netherlands. You can find JoeCo in hall 8, on booth E-97.