Kilohearts is offering a 50% discount on the Faturator, a distortion plugin with a unique sound and tunable distortion, as well as stereo widening possibilities. 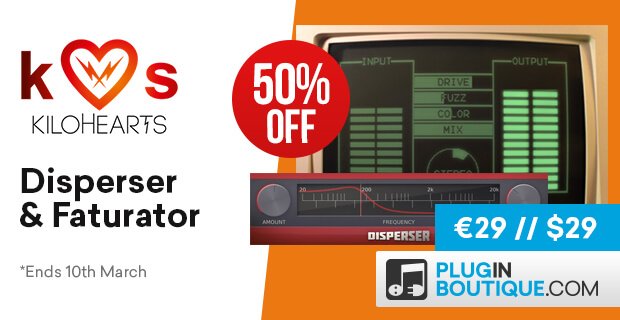 In contrast to many common distortion effects Faturator preserves the dynamics of your sound.

Grit, oomph, fatness, raw, color, or just that certain something. Sometimes your sounds need a shovel of dirt. Faturator is standing ready to tear whatever you throw at it apart violently, and then gently (but firmly) put it back together fatter and rawer than ever.

Faturator can do everything from adding subtle and warm gritty character to your sounds to slam them into a wall of heavy saturation and digital fuzz. Contrary to many distortion effects, Faturator will preserve the dynamics of your sound and work its wonders on it regardless of input gain.

For the heck of it, it can also color the input to emphasize a specific tone of the sound, or throw some stereo width into the mix. Everything to give you a fast and easy way of making any input come alive.

Faturator is on sale for only $29 USD / 29 EUR from Kilohearts and distributor Plugin Boutique until March 12th, 2019. The plugin is available for Windows and Mac in VST, AU, AAX and Snapin formats.

You can also save 50% off the Disperser plugin during the promotion.