Liine has announced the release of Kapture Pad, an app for iPhone/iPad to control Ableton Live. 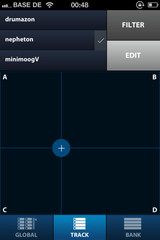 It is an indispensible live performance utility and a mindbending sound design tool. It builds on the success of the Kapture Max for Live patch, originally created in 2010 for Richie Hawtin’s Plastikman Live show. Kapture Pad does not require Max for Live.

Kapture Pad lets you take snapshots of your Live set and restore them at will without interrupting the audio. A Global Snapshot stores the mixer and device parameters – for all tracks and all devices (yes, even VSTs and Audio Units). Kapture Pad also introduces Track Snapshots with morphing – an incredible new way to perform electronic music with Live.

Kapture Pad is available to purchase for $5.99 USD.