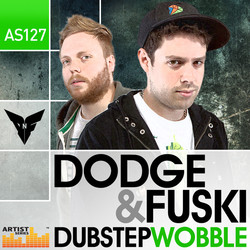 Dubstep Wobble is a Royalty Free collection of over 500 production ready samples that intentionally sidestep the endless stream of robot noises and monster growls to bring a fresh take on the classic sounds that inspired the early Dubstep scene. This collection reworks the sonic weapons used in the early Dodge and Fuski productions and features heavy use of Reggae Skanks, Laser Sirens, Dub Drops, Half Step Beats and most importantly plenty of Dirty Wobble Basses lovingly re-created and reworked for the new generation of Dubstep producers.

Dodge & Fuski are two chaps that have firmly found their feet in the bass music scene with a skill for switching genres and varying BPM’s throughout their sets, twisting up Dubstep, Electro and D&B flavours to create a fresh contemporary sound. Since the beginning of 2011 the Dubstep and Drumstep duo have racked up over 3 million views on YouTube and have been championed by Radio 1, 1 Xtra and the world’s leading YouTube Dubstep channel UKF.

The sample pack is available to purchase for £29.95 GBP. Individual parts are also sold separately.