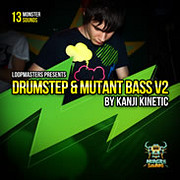 Kanji Kinetic is a guy who has managed to sculpt his own take on the 140bpm mash up game. His first foray into the world of bass and beats came back in 2008 when his debut release was put out by Rag & Bone Records. This saw him grab the attention of Drop The Lime Starkey, Taz Buckfaster, Tayo, Mary Anne Hobbs, B Rich, Chrissy Murderbot, Akira Kiteshi, Reso and DZ with its fresh, energetic mix of bassline, techno, dubstep and chiptune influences.

Drumstep and Mutant Bass Volume 2 weighs in at 563MB and includes 504 samples at 24Bit, with 279 Loops between 140 – 175 Bpm, plus 225 One Shot Samples! Included with this pack you get 30 ready to play patches for Halion, Kontakt, EXS, SFZ and Reason NNXT compatible soft samplers. Ableton Live, Apple Loops and Reason Refill versions are also available.

Drumstep and Mutant Bass Vol 2 is available to purchase starting at £11.95 GBP.