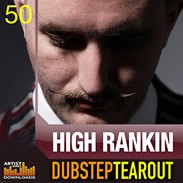 Dubstep dandy and local bounder, High Rankin is one of the scenes more eccentric artists. His music brims with character and personality that engulfs the listener as well as causing the obvious dance floor riot! He has an excellent moustache and will fight anyone who disagrees.

High Rankin signed to Underdogs Management in July 2008 and since then has released his lauded EP’s on Herve’s Cheap Thrills label, with his own Suicide Dub imprint now in full flow. His live performances have become highly in demand across the UK and Europe. Ever the avid remixer, his remixes for Kevin Rudolf, Missy Eliot, Cypress Hill, Skunk Anansie, Adam Freeland and Amon Tobin etc have garnered him even further acclaim. 2010 saw him return to his true passion – releasing his increasingly diverse music in completely the way he wants.

High Rankin Dubstep Tearout is available to purchase as a download for £24.95 GBP.