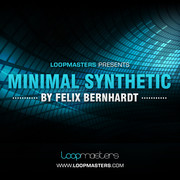 Felix Bernhardt is an impulsive, minimal producer who creates slippery, undertermined and sizzling sounds, which have been released to date on German labels such as Hardshower, Kaufe Musik and Afulab – with credits and plays by some of the biggest name Djs such as DJ Hell, Laurent Garnier, and George Morel amongst others. Felix is an upcoming talent, and Loopmasters are very proud to present his collection devoted to the minimal side of House and Techno – Minimal Synthetic.

Pure Minimalist principles have gone into the creation of this original collection, including much micro-processing and software manipulation to create a huge pallete of minimal textures, stings, stabs, hits and soundbeds. Produced from a European/German minimalist perspective – some could argue this is the pure sound of minimal music, and sampling the sounds included in this pack for inclusion in your House and Techno music will certainly provide some of that musical DNA.

Minimal Synthetic is available for purchase for £24.95 GBP.