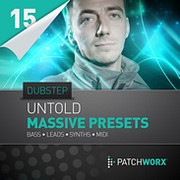 Patchworx 15- Dubstep Basses is a collection of Lead Basses, Main, Mid and Sub Basses exclusively created by DJ Untold, one of the most respected producers in the Dubstep scene right now.

Picked up in early 2008 by Hessle Audio, Jack’s Kingdom EP was the third release on the then fledgling imprint, introduced a musical palate that was both nuanced and understated but with bags of bass weight. By early 2009, Jack had been hammering a selection of awesomely anachronistic but idiosyncratic music on CDR; fuel for an ever-growing DJ schedule. A slew of essential remixes followed for 2nd Drop and Planet Mu, alongside original material on Hotflush and Brainmath.

Untold Dubstep Massive Presets is available to purchase for £19.95 GBP.