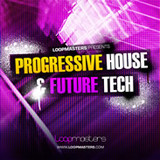 A consummate collection of some of the deepest loops for house music’s elite production specialists, featuring a wealth of previously unheard and unreleased material created exclusively for Loopmasters with modern house music producers solely in mind.

This collection of royalty free samples includes everything between Progressive and the Main Room side of Tech House as pioneered by artists such as Tiger Stripes, Bingo Players, D Ramirez, Mark Knight, John Dahlback, and labels such as Noir, Toolroom, Stealth, Poker -Flat, Sneekerz, Get Physical, Nervous, and Spinnin.

Essential sounds which create a multi tempo melting pot of edgy, dirty and twisted samples that not only captures the current sound of dance floors worldwide but provides inspirational sounds that we are sure will play its part in the future of these genres.

Progressive House & Future Tech is available to purchase for £39.95 GBP.