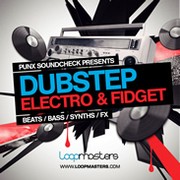 Punx Soundcheck is the partnership of John Taylor, and (former Natural Born Chiller) Arif Salih, who cut their teeth with a series of remixes and the infamous ‘Icon Series’ on seven-inch vinyl. They quickly developed a unique sound that fused futuristic and retro electro with a punk rock attitude.

Dubstep, Electro and Fidget is a fresh collection of samples for multi genre producers looking to mix Electro Filth, Dubstep Beats and Fidget Basslines into new sonic creations, and they wont be disappointed.

This versatile collection of inspiration weighs in at 800MB and features 757 24 Bit samples, including 138 Loops between 108 – 140 Bpm, plus 620 One Shot Samples. Producers alsoi get 129 ready to play patches for Halion, SFZ, Kontakt, Reason NNXT and EXS compatible soft samplers. Apple Loops, Ableton Live and Reason 6 compatible versions including Kong banks are also available to purchase separately.