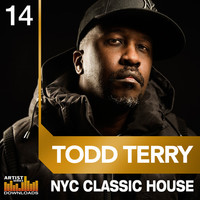 With a history of success through the last 3 decades it seemed the right thing for us to call this collection ‘NYC Classic House’, and we are convinced that producers worldwide will draw inspiration from the loops and samples found on this unique collection from the man himself.

Grammy Award nominated DJ/Producer Todd Terry has been engulfed in dance music since he first started listening to European dance music records while growing up in Brooklyn. By 1988, Todd Terry hit big in England and Europe, and his notoriety was making its way back to the U.S.

In addition to DJ appearances, Todd was cutting his classic underground tracks A Day In The Life, Weekend, and Can You Party, released under monikers such as the Todd Terry Project, House Of Gypsies, and Royal House. Following with the release of ‘Keep On Jumpin’, Todd continued to break new ground as a Producer/Remixer. From SNAP to Annie Lennox to George Michael to Bjork, Todd’s mixes bridge the ground between club cool and commercial accessibility. In 1995, his remix for Everything But The Girl’s Missing became a worldwide smash, giving the British duo their first ever hit. Todd is one of the world’s most celebrated figures in dance music. With almost two decades of dance floor domination under his belt the quality of his productions continue to go from strength to strength.