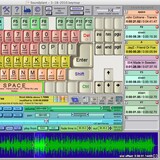 Marcel Blum has announced the release of version 39 of Soundplant, a software sampler for Windows and Mac that turns the computer keyboard into a low latency digital audio performance tool and playable instrument.

Soundplant can be used to trigger sound effects or background tracks during a show, for music or loop creation, as a drum pad, as an educational aid, as a unique electronic instrument with an input device you’ve been practicing on for as long as you’ve been typing, and as a sound design sketchpad. It allows dragging and dropping sound files on to keys for quick and easy setup; playback from RAM for instant cueing or from disk for unlimited sound length; auto-pitch-assign to easily spread the same sound across multiple keys at varying pitches; auto-offset-assign to quickly slice up samples across multiple keys; and much more. Soundplant is a true performance program that allows playback and triggering to continue even while configuring, loading, and unloading sounds on the fly.

Soundplant is available to purchase for PC and Mac for $35 USD. A free 25-launch trial of the registered features is available to download from the Soundplant website. In unregistered mode it is free for non-commercial use and limited to playing uncompressed 8- and 16-bit wav and aif files.