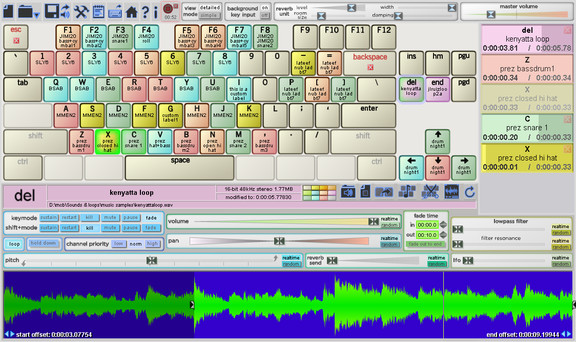 Soundplant turns the standard QWERTY keyboard into a playable instrument with ultra low latency, allowing the instant playback of any format sound files on 72 keyboard keys with no need for extra hardware.

Soundplant’s cult following continues to expand the $50 software’s diversity of uses. Hollywood engineer Ed Novick used it in his 2010 Academy Award-winning sound mixing on Inception as well as in The Dark Knight Rises, Moneyball, and other films. Surf rock band Man or Astro-Man? played their sci-fi samples with Soundplant; metal band Nile used it for exotic percussion. When the foley artists of NPR’s A Prairie Home Companion aren’t handmaking their sound effects, they turn to Soundplant for a digital assist. The NFL’s Tennessee Titans used it at LP Field stadium. Soundplant even made it to Carnegie Hall, with new music champion Paul Pinto performing on the software for the 2014 premier of composer Erin Rogers’ Mother Earth. Organizations like London’s Drake Music taught disabled children to create music through Soundplant’s intuitive simplicity, and artists, educators, and DIYers delighted kids and adults with Soundplant-powered installations like the 2013 New York Maker Faire Editor’s Choice Award-winning xylophone drum pad Nazca Beats.

Soundplant, now in its 15th year, turns an input device you’ve been practicing on for as long as you’ve been typing into a versatile multitrack playback tool, providing hours of audio at your fingertips while avoiding the need for expensive dedicated hardware. New version 42 maintains its beloved rock-solid stability, low cost, straightforward drag-and-drop sound file assignment, and powerful flexibility as standalone software, while bringing new features such as 32-bit floating point mixing and 96 kHz output for audiophile accuracy, 256 channel polyphony for rich sound design, several new lightweight realtime effects, direct output recording, and finer key press and release control. You can continue triggering sounds while using any other program with Soundplant hidden, and launch an unlimited number of Soundplant instances allowing outputting to multiple sound devices, multitrack recording, and more banks of sounds. Soundplant works identically on Windows or Mac and keymaps can be transferred across computers with ease.

Soundplant is free for non-commercial use with limitations on some professional features. The registered version is available for purchase for $50 USD ($40 USD upgrade from v.39).