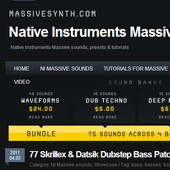 MassiveSynth has released the Massive Dubstep Bass Pack, a soundset for the Massive synthesizer by Native instruments.

Are you looking for some incredible dubstep bass patches for NI Massive?

MassiveSynth has teamed up with dubstep producer Tom Stocks to bring you a pack of 77 Skrillex and Datsik dubstep bass patches creating an unmissable set of bass heavy synth sounds for massive to take your productions to the next level.

Skrillex and Datsik are both known for their powerful and pulsating take on dubstep – both with an undeniable heaviness but with a sleek and robotic groove that is extremely danceable. The source of all this is of course the bass lines!

The Massive Dubstep Bass Pack is available to purchase for $40 USD.