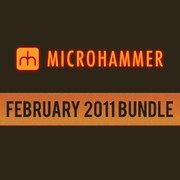 Microhammer has released the February 2011 Bundle, a collection of sample libraries for Native Instruments Kontakt.

We are excited to bring you our latest four products: “Metal Bowls”, “Borosilicate Bells”, “99 Beer Bottles” and “Gnomehammer Vol. 2” in an affordable bundle collection. The bundle is only valid until our next release, so grab it while you can. The original price is $66, however we are offering it for mere $45.

The Microhammer February 2011 Bundle is available to purchase for $45 USD (original price $66 USD). The offer expires upon the next microhammer release.