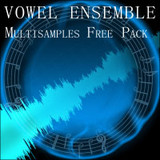 The choir patch was developed by Mihai Sorohan together with Richard Osborn for Mu.Lab Multisampla and Selcuk Bor (from Symphony of Specters) for Kontakt.

The Vowel Ensemble Choir Pack is available as a free download. Note: The Kontakt files and patches can be found on Symphony of Specters Facebook Page.