SEQ12 is a tabletop (rack-mountable) console-type unit that lends itself to creating and arranging pattern-based music as a live performance-capable standalone sequencing tool or working alongside a DAW to enhance production possibilities. 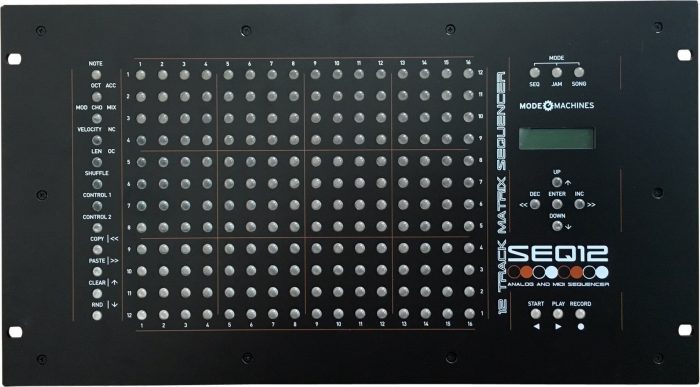 SEQ12 is a MIDI Matrix Sequencer (in a console housing) and offers one MIDI Input and three MIDI Outputs. It gives access to 12 tracks and you are able to choose between three track types: drum, chord and monophone. Each track has 2 or 3 controller tracks, routing on midi outputs and midi channel adjustable. Also each track has 16 patterns, these can be played in freely programmable sequences one behind the other. Each pattern has its own shuffle pattern, 2 to 3 controller tracks and additional ratchet modes with programmable pitch and trigger patterns.

The product can record Midi notes and controller values via Midi In and the data can be edited using the LED buttons. There are 32 memory slots in the device and it has a very stable and accurate timing.