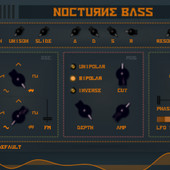 Nocturne Bass for Windows (VST) is available to purchase for 25 EUR.