MOTU has announced it is now shipping MachFive 3.0, a major upgrade to their universal sampler for creative music production.

Rebuilt from the ground up, version 3.0 includes a new user interface design, an extensive 45 GB sound library, seven signature instruments based on new scripting technology, a new hybrid synthesis engine, licensed algorithms from the IRCAM research institute, and many other new features and enhancements. 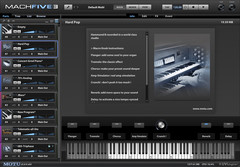 The MachFive 3 window displays a tabbed list on the left-hand side, main controls across the top, and a tabbed main area in the rest of the window for access to all other features. Sections can be resized, shown, or hidden as needed, to streamline operation for any task or workflow. MachFive’s window is designed to operate at various sizes, from a compact plug-in running inside host software to a full screen application taking full advantage of cinema-sized displays.

To load sounds into MachFive’s unlimited parts, a multi-column preset browser fills the MachFive window and remains open while loading multiple parts to save time. “Favorite” locations are listed along with hard drive volumes, frequently accessed folders, sound banks, and 3rd-party sampler disc images. Type a word or phrase into the new search field to instantly list all matching presets from all sound banks and libraries.

Once sounds are loaded, users click any part to view basic settings in the Info tab, including a representative graphic of the sound currently loaded into the part, a virtual keyboard for playing the sound, several basic “macro” controls for tweaking the sound, and text hints for using the macro controls.

Most of MachFive’s thousands of factory-supplied presets provide macro controls for direct access to the sound’s most crucial and interesting parameters, from reverb time to filter cutoff frequency. This allows users to tweak sounds quickly, without having to dig through complicated screens full of controls. Some macros even adjust several parameters at once to completely transform the sound with a simple knob twist. 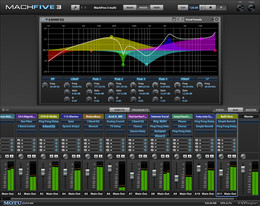 All of these multi-sampled sounds can be used side by side — or even combined — with MachFive 3’s new synth engine, which produces twelve milestone forms of synthesis developed over the past 40 years, from classic additive and subtractive, to frequency modulation (FM), wavetable, and even granular synthesis. MachFive’s granular synthesizer has been licensed from the IRCAM institute in Paris and represents one of the most advanced, yet easy-to-use forms of this technology currently available. Users can load any sound and quickly transform it into completely new material. Further dynamic sound morphing can be be easily applied by simply automating or modulating granular synth controls such as speed, direction, density and grain size. 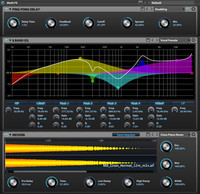 MachFive’s effects architecture has been redesigned to facilitate the use of effects processing both in sound design and in MachFive’s conventional mixer. 47 different effects, including convolution reverb, can be applied to sound design objects such as individual oscillators/keygroups, keygroup layers, and programs (presets), where they essentially become part of the sound itself. Alternately, effects can be applied throughout MachFive’s mixer as channel inserts, aux bus inserts, and even as master effects on the master fader, limited only by CPU resources.

Like a real player, MachFive’s scripted instruments add expressive nuance that faithfully reproduces not only the sound but the playing characteristics of the instrument, including finger picking techniques, string hammer-ons, note-bending, and chord strumming. The electric guitar and bass instruments play proper fingerings and inversions for guitar chords, regardless of how they are played on a keyboard or other MIDI controller. MachFive’s signature instruments set a new standard for virtual instrument realism and ease of use:

Built on the 3rd-generation UVI Engine XT, MachFive provides a host of advanced features for high-end music production, such as on-the-fly upsampling and downsampling, so that users do not need to be concerned with the bit depth or sample rate of their sample material. Other advanced features include an enhanced, highly efficient disk streaming engine, support for HD audio, and full support for up to 7.1 multi-channel surround sound.

MachFive 3 excels at audio time-stretching and pitch-shifting with algorithms licensed from the renowned IRCAM research institute. Audio material can be stretched as much as four to five times slower or faster with no noticeable or harmful artifacts, while maintaining stereo phase coherence and rhythmic accuracy. For example, a guitar pick can be heard slowly scraping across each string in the strum of a chord that has been slowed down to 25% of its original speed, with audio clarity akin to the vivid visual clarity of slow-motion high-definition video. Several modes are provided to produce optimum results for various types of audio material. Time-stretching examples can be listened to.

Script processors and event processors are managed in MachFive’s Event Processor Rack, which looks and works just like the Effects Rack: users choose a part and then load processors into the rack. Preset event processors include an advanced arpeggiator with dozens of presents, a user-editable micro tuner that supports the open-standard Scala microtonal scale standard, a chord recognition module, a chord generator, a unison generator, and an ensemble generator. 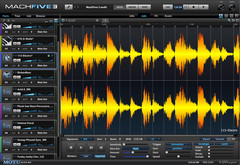 System specs, availability, and pricing
MachFive 3.0 supports Mac OS X (10.5 or later) and Windows 7/Vista. It operates stand-alone or as a plug-in (AU, VST and RTAS). 64-bit operation is available for supporting systems and hosts.

MachFive 3.0 is now shipping. Price remains the same at $495. Registered version 1 and 2 users can upgrade to version 3 for $179. A competitive upgrade is also available, with proof of ownership, for $295.