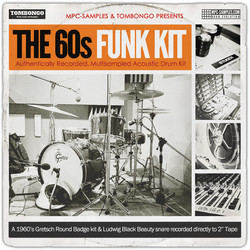 MPC-Samples has announced the release of The 60s Funk Kit, a multisampled drum kit recorded to analogue tape that perfectly captures the unique sound and vibe of the great funk records from the 60’s and early 70’s.

Inspired by the kits used by legendary drummers such as Clyde Stubblefield, Jabo Starks and Zigaboo Modeliste and built around a 1960s Gretsch Round Badge kick drum and a Ludwig Black Beauty snare, it’s full of the warmth and character you’d expect to hear from classic vintage drum recordings.

Samples are provided in 24 and 16 bit WAV format as well as legacy MPC SND and are completely unprocessed for a traditional and natural sound, giving you complete freedom to add your own EQ and processing during mixdown.

We’ve also included ready-made MPC programs carefully tweaked and configured for all MPC models (including JJOS) that load up intuitively laid out finger-drumming kits utilising features such as velocity switching and ‘round robins’ to help you create very realistic sounding drum performances in your MPC sequencer.