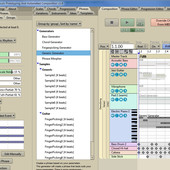 MusicDevelopments has announced the release of RapidComposer LE, a Light Edition of the rapid music prototyping software designed for composers, song-writers and musicians of all musical styles.

The new RapidComposer LE is aimed to serious hobbyist musicians and composers.