Native Instruments has announced the release of Discovery Series: West Africa, a new instrument that centers on the infectious polyrhythmic grooves of traditional African music.

For use in KONTAKT 4 and in the free KONTAKT PLAYER, the instrument provides the full sonic spectrum of a West-African percussion ensemble, and represents a unique and highly versatile resource for film scoring as well as contemporary pop and club music styles. 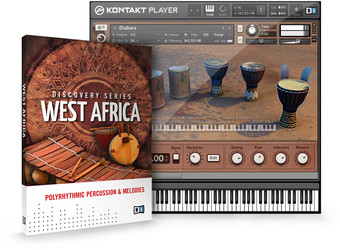 Recognising the substantial influence of traditional African grooves on contemporary Western music, WEST AFRICA provides the typical percussion and melody instruments of the region, combined with a versatile array of authentic and instantly usable polyrhythmic patterns. The instrument faithfully recreates a typical six-person percussion ensemble centered around multiple types of Djembe and Dunun drums. This setup is complemented by Calabash and Krin, as well as unique melodic instruments like the Kora and Bolon harp, various Balafons, the distinctive Ngoni, and the Fula flute. All instruments were recorded with painstaking precision in Native Instruments’ studios in Berlin, resulting in 3 GB of studio-quality sample material.

WEST AFRICA features a specifically designed sequencer that provides over 70 pre-programmed ensemble patterns with complex West-African grooves, complete with solos, fills and single hits that can be intuitively triggered via the keyboard. Patterns automatically sync to the tempo of a host sequencer, and can be easily edited or created from scratch using an intuitive visual interface. With advanced options to modify the feel and intensity of the groove, a choice between heptatonic and chromatic instrument scales, and a wide range of ensemble configuration options, WEST AFRICA provides all necessary means to recreate the profound sonic impact of traditional West-African music with all its intricacies and universal appeal.