Drumforge Bergstrand features a detailed collection of Daniel’s own personal sample library recorded over 3 decades consisting of 13 Kicks, 19 Snares, 3 Sets of Toms, and a full set of cymbals.

With these samples, Daniel is giving the world the exact genre-defining sounds he has been using on his own mixes for years. Authenticity was the highest priority in this collaboration so that the user could experience what it would be to have some of the world’s most infamous rock and metal drum sounds in their DAW. 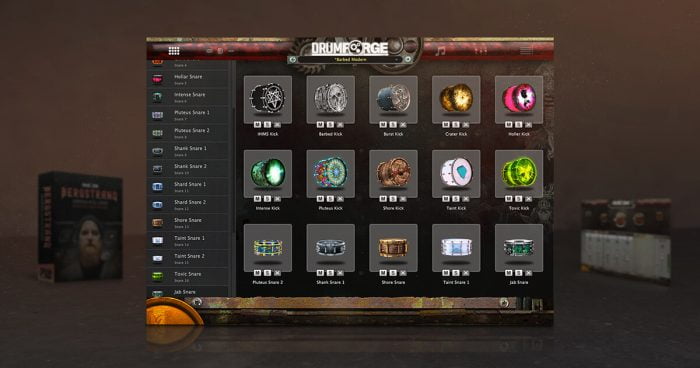 Included in the sampler is a fully automatable DSP mixer, customizable MIDI mapping, and the ability to choose Daniel’s own unique engineering setups to create any style of rock and metal drum sound you can imagine. With the features of the Drumforge Classic Sampler already in place, users will discover a brand new song building tool and the ability to load in user one-shot samples into mixes.

Drumforge has given a lot of thought to recreating human-like drum performances with this sampler and has come up with a few ways to achieve that.

Starting with samples taken of both the left and right kick drum beaters on each kick along with a Foot Switching algorithm that allows the user to program kick parts with a single MIDI note while having the left and right foot samples alternate based on speed. The user is also provided control over the volume level of each individual velocity layer for each articulation so they can adjust for drum-fill realism.

For those who want to further enhance the performance over the velocity and gain of samples, there is a velocity interpretation curve so you can make the difference between loudest and softest hits more or less dynamic or anything in between. Finally, Drumforge Bergstrand features a time-tested smoothing algorithm in between successive hits to make drum programming sound more like real drum performances.

Use coupon code BERGSTRANDINTRO at the checkout on the Drumforge website to get the discount.