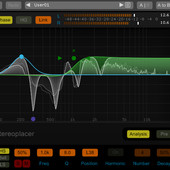 NuGen Audio has released updates for the plug-ins included in the Stereopack, suite of a stereo enhancement, focusing and restoration plug-ins.

Monofilter, Stereoizer and Stereoplacer have all been updated to include RTAS and Audiosuite mono-to-stereo versions of the plug-ins. A mouse-click issue has also been resolved in the AU when used with Bias Peak.

Stereopack 2 is available to purchase for PC and Mac (VST/AU/RTAS) priced at $199 USD.