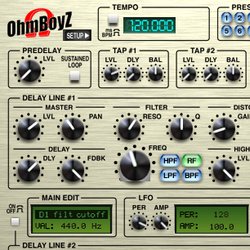 Plugin Boutique has launched a 24-hour sale on OhmBoyz, offering a 50% discount on the delay effect plug-in by Ohm Force.

Is it a bird? Is it a plane? No, it’s just the highly acclaimed OhmBoyz, a delay unit that starts with 4 pre-delays, each offering independent sync, level and pan controls.

This then feeds into 2 more delay units with a bunch of features associated with each: again, tempo sync, level and pan controls, but also a couple of rather well-endowed filters consisting of peak, low-pass, high-pass, bandpass and a resonance control.