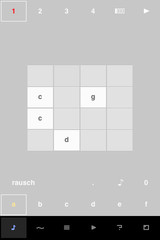 Oliver Wittchow has released Nanoloop Lite, a free version of the iPhone app that combines sequencer, synthesizer and sampler in one package.

Nanoloop was originally developed for Game Boy (first release in 1999) and is a popular platform for mobile music creation. The new iPhone version presented here follows the same basic structure and design concept but otherwise it is an entirely new program. It does not simulate the Game Boy’s sound or other functions but has been fully optimised for the iPhone’s capabilities.

The Lite version is fully functional and shares all features of the full version, except for the following limitations: