Orange Tree Samples has announced the release of the Passion Flute, a jazz-rock sample library for Native Instruments Kontakt. 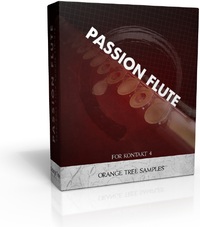 This extensive library puts you in control of an ultra-realistic Jazz-Rock flute. Whether you need an energetic flute solo or an emotive, rich lead for a melodic ballad, Passion Flute is capable of a wide range of expression.

Flutes are complex instruments with many dynamic facets of expression, and therefore are challenging to recreate with samples. That’s why rather than sampling dozens of different articulations to imitate performance techniques, we’ve used advanced scripting to give you full control over the flute performance. For example, the vibrato is completely scripted–and not just a simple LFO, but modeled from real flute vibrato–allowing you to control the vibrato depth and speed in real-time. Also, although we sampled the flute in five dynamics, we added scripting that smoothly morphs between these dynamics using mathematically-accurate equal-power crossfades. Passion Flute’s interface allows you to assign these performance elements to any MIDI continuous controller you want–or you can let the script automatically control them for you.

Passion Flute features the great Jazz flutist/composer, Mattan Klein. Mattan performs all over the world, and has played at places such as Carnegie Hall, the Kennedy Center for Performing Arts in Washington DC, and many other prestigious venues. He also was featured at the Tel Aviv International Jazz Festival in 2009 and the Ottawa International Writers Festival. In addition to touring North America, Mattan has toured Brazil, Europe, Vietnam, Hong Kong, and the Philippines.

We sampled the flute in 48,000 kHz, 24-bit, which is a great balance between size on your hard drive (affecting the library’s load time and memory usage) and audio fidelity. That’s over 4,600 samples, totaling 1.15 GB of flute samples. Furthermore, we sampled the flute with five different microphones, everything from modern condenser mics to a vintage ribbon mic, giving you flexibility to mix the flute however you want–or pick from the included factory presets. The mic signals were completely unaffected, so Passion Flute’s real-time mixing control starts all the way back with the raw audio signals. Speaking of mixing, we also included the ability to import and export your flute mix presets. That way, you can easily share them with other Passion Flute users.