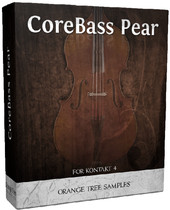 CoreBass Pear for Kontakt 4 (requires full version) is available to purchase for the introductory price of $49.95 USD until June 30th (regular price $64.95 USD).