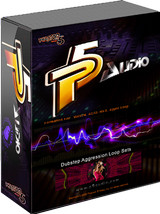 P5Audio has announced the release of Dubstep Aggression, a new collection of loop sets.

Prepare to GRIND your teeth! P5Audio has teamed up with Dubstep producers Sinister Source and The S.K. to bring you Dubstep Aggression Loop Sets.

Ten years ago Dubstep music started out as a underground Electronica Dance music in the UK. Now it has turned into a mainstream style influencing electronica and dance music. It has a gritty, dark, grinding, syncopated styles are perfectly captured in P5Audio’s Dubstep Aggression Loop Sets.

Dubstep Aggression is available to purchase for as a download or on DVD, priced at $49.99 USD.