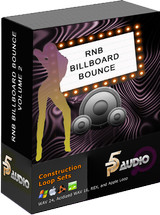 P5Audio has announced the release of RnB Billboard Bounce Vol.2, a collection of RnB music loops.

RnB Billboard Bounce Vol. 2 Loop Sets…It’s time for the sequel! By Popular demand P5audio is bringing you more of those chart topping hit tracks with volume 2 of our hit series RnB Billboard Bounce! We are once again experimenting with a new format. 21 Loop Sets divided into groups of three. Verse/Hook/Bridge.

RnB Billboard Bounce Vol.2 is available to purchase as a download for $44.99 USD.